Goddamn capitalism and its inevitabilities

The Lance of Longinus 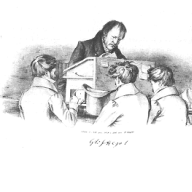 Discipline, focus and teamwork are classic prescriptions for success, perhaps — nowhere more so than in the hard-working nation of Japan. But one man has carved his own strange path to fame and fortune by doing quite the opposite. From Tokyo, Lucy Craft has his story.
Click to expand...

-->
the do-nothing rent-a-man... aren't all state departments filled with such positions?

anyways kudos to the guy, he found a service that has demand, so why not

Not all departments are equal but I think in general you're confusing the public service for politicians, when you see a gathering of useless yes-men it's a minster's entourage.

-->
its not capitalism, its a reflection of societal loneliness and alienation. capitalism both solves and create problems

he is no pros yet, which is worse problem and side effect of capitalism.
Its not I am lazy, its just I don't like work with deadlines.

Attributed to capitalism, so... I mean, do we really think that the presence of capitalism makes it necessary for this to happen? No doubt it incentivizes us to prioritize antisocial behavior, but is it not a baby with the bathwater, all or nothing argument?

I do think that it is a byproduct of capitalism, as it is entwined with our culture, but surely we just haven't learned the remedy to it, right?

Not all departments are equal but I think in general you're confusing the public service for politicians, when you see a gathering of useless yes-men it's a minster's entourage.
Click to expand...

politicians have at least some skin in the game, since their actions are on display for everyone to see and their careers depend on keeping their constituents happy. State-employees and bureaucrats are 99% useless lazy fucks

One atom of me

dr froyd said:
politicians have at least some skin in the game, since their actions are on display for everyone to see
Click to expand...

Are they on display though?
I swear most politicians seem to be doing nothing.
It never seizes to amaze me to see politicians argue on TV.
I think the job of most politicians is to raise issues in media that are nonessential all the while they do the important things out of anyones sight. Good example how most people cannot even tell you what politicians really do, and honest to God no one really need to even care.
Most important things that happen are rarely under proper scrutiny.

Politicians are in "persistent" control until their office terms are up. They can move around a certain amount of resources within the bureaucratic system however they want without anyone one the outside seeing.

If I happen to be a business owner for example, then I win office, I suddenly have government workers at my disposal. People who went to school and know how to use Google.

This with the persistent control they have, ensure that the media will always be receptive to what they have to say, so long as it satisfies a media narrative and stokes the flames.

If the lose office what happens? Nothing as far I can tell, unless they have some debts to repay, but that depends on the politician, not representative of the group in general.

One atom of me

EndogenousRebel said:
I do think that it is a byproduct of capitalism, as it is entwined with our culture, but surely we just haven't learned the remedy to it, right?
Click to expand...

Humans in capitalism in many ways might be suffering or having similar problems they had before. Nothing in capitalism is so unique it cannot have existed before.

So essentially yeah, human nature is above capitalism. Capitalism just gives human problems its unique spin, just like socialism had its unique social spin on humans.

Its not like people really had much different personalities in the past or had lesser problems or not had same problems.

Alcoholism for example has been a problem and always perceived as social problem since the first records.
Physical or psychological illness was the same.

In such instant this should be seen as pretty unique solution to capitalism.
People would probably have to solve this problem differently in another society, but since people have the money and actually face the problem in such way it has a solution.

I think the guy is solving a pretty obvious problem and that is extreme extroversion.
Japanese are extreme extroverts. Also very J types.
They are hyper social to point of being neurotic about it. Which explains why so many people there suicide.

My understanding is that Japanese culture has many constraints, and very orderly culture, in some ways that is a big positive, but it also puts people into a lifestyle that brings about lot of restriction, less ability to be yourself, a lot of pressure on being specific kind of social.

The thing about socializing is that its not just a glue that holds people to gather, but it also puts people into a certain way of thinking and doing things.

In one instance it means nothing, but if you have a whole culture build around certain way of thinking and doing things, its very hard for people to really be individual and experience a real sense of individual when socializing.

I mean what kind of mad social pressure it has to be to end up with people willing to pay you money just to eat with them. That is mad crazy.

ZenRaiden said:
I mean what kind of mad social pressure it has to be to end up with people willing to pay you money just to eat with them. That is mad crazy.
Click to expand...

So to get away from all the extraversion they hire a person who won't judge them?

Seems reasonable to me.
Do you want a pop-tart?

Well imagine a world where people will only socialize with you if you have something (money) to trade with them. As opposed to something like sheer psychological/companion value.

Supply and demand on a micro scale like this however needs to be expanded on. That one lady said she payed the guy because she never had to worry about his wishes, as opposed to her friends who would only go places that they want to go. That in her life is a rare thing, and a problem that money, thanks to this guy and people like him, can easily solve. In theory it's unnecessary, but then, would you rather be judged for paying for companionship, or be judged for putting in effort to get companionship and failing?

Still shows a failure of our society in my opinion, and capitalism does intensify these failures, but there's something cultural here that I think needs to change outside of economic policy. But certain people don't want that.

I would not call personality a cultural artifact. If people won't socialize with others just for the companionship but to get something out of the other that is a personality trait enforced by culture not caused by it. I mean how do you change a personality trait in the wider society? Japan is an honor-based society. That is a personal factor whether people feel shame for who they are. Different from guilt where who you are is just wrong. What you are vs what you do. External and internal. No reason to feel guilty for buying companionship. No shame in porn. Or prostitutes. All things in the west guilt is not present. Do anything as long as it is socially acceptable.

God is not feared because hell doesn't exist. That cultural difference makes it possible to have the culture japan has. It is acceptable to be yourself as long as culture sees fit.
Do you want a pop-tart?
You must log in or register to reply here.
Share:
Share
Top Bottom